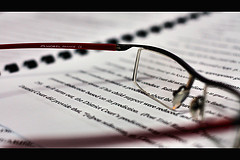 A concave nearsighted lens could create a virtual image that could help a person who is nearsighted to see objects more clearly. Concave lenses are thinner at the center than on the edges and used to correct nearsightedness or myopia.

In this lens, after rays of light have passed through it,   they appear to come from a principal focus point. This is the point unto which the collimated light moving parallel to the axis of the lens is focused. The image that is formed by a concave lens is virtual, which means that it looks farther away than it really is, and   thus smaller than the object itself. Often, curved mirrors have this effect that is why many come with a warning such as: objects in mirror are closer than they look.  The image is also upright, which means it is not inverted.

The formula of the lens that is used to work out the nature and position of the image formed by the lens could be illustrated as follows: 1/u + 1/v = 1/f. The u and v are the distances of the image and object from the lens respectively. The f is the focal length of the concave lens.